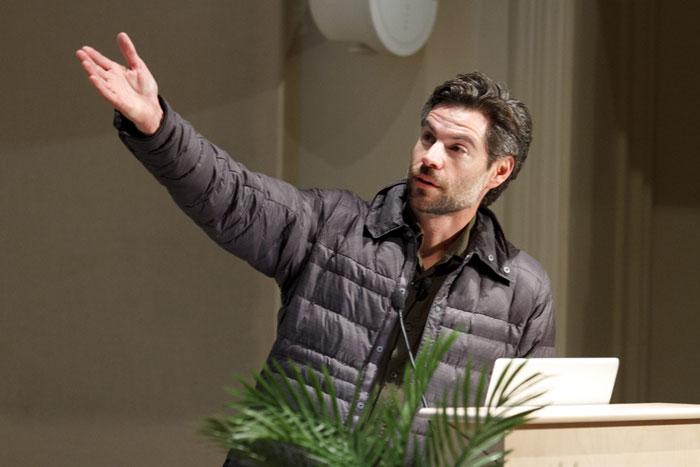 The day after he appeared on Comedy Central’s The Colbert Report and hours before he delivered a standing-room-only Clarke Forum lecture on campus, Michael Shellenberger discussed his provocative view that only more technology can save the environment with seven students participating in Dickinson's new Baird Sustainability Fellows program.

“It’s important to talk about this,” Shellenberger told the students, who will also meet with Bill McKibben and David Orr, participate  in an interdisciplinary colloquium and complete a sustainability-related research or service project this semester. “People say things like, ‘These are dark times!’ Really? People are living longer; more farmland is reverting to nature. We’ve got a huge carbon and climate challenge, but personally I’m more optimistic than I’ve ever been.”

Throughout the hour-long discussion, Shellenberger engaged the students with statements that refuted longstanding environmental beliefs. But the forum also gave students the chance to push back, prompting them to think more deeply and flesh out their thoughts in new ways.

Quoting Shellenberger's essay “Evolve,” senior English major Sarah Ganong asked him to elaborate on his stance that every piece of technology humankind has harnessed—from fire and farms to nuclear power plants and solar panels—is “natural, drawn as they are from the raw materials of the earth.” “I personally disagree with that understanding of nature and natural,” she said, “and was wondering if you could speak more to your opinion of that.”

“OK, let’s start with this,” Shellenberger began. “Tell me what’s natural and unnatural, and how do you decide?” The response he elicited quickly narrowed the topic: “I guess it’s with something like nuclear plants where I have a problem with that,” Ganong said. “Even if we are natural creations, we’re doing something unnatural. It’s the extent of the technology.”

Shellenberger went on to parse the very nature of what it means to be natural and unnatural, how the terms historically have been used and why: “Natural and unnatural have traditionally been used to set social norms,” he said. “We’re just using different words to describe different realities. What I’m interested in, in the nonacademic sense, is pulling on some of these levers and seeing if it opens up some space for new politics.”

This new space often was filled with discussion of technology’s role in damaging and saving the earth from human influence. Not content to just listen, the students questioned Shellenberger's faith in technology serving the earth as an “optimistic tool.” With the discussion ranging from nuclear power to the Frankenstein myth, the forum afforded the students a rare opportunity to dig deeper into sustainability with one of the field's most controversial voices.

Co-sponsored by the Clarke Forum for Contemporary Issues and the Center for Sustainability Education, Shellenberger's visit to the college was part of the Living in a World of Limits series, which will bring some of the nation's preeminent environmental thought leaders to Dickinson this semester to discuss critical 21st-century challenges. In addition to addressing the campus community, speakers from the series will meet with the Baird Fellows program candidates for candid discussions on these challenges.