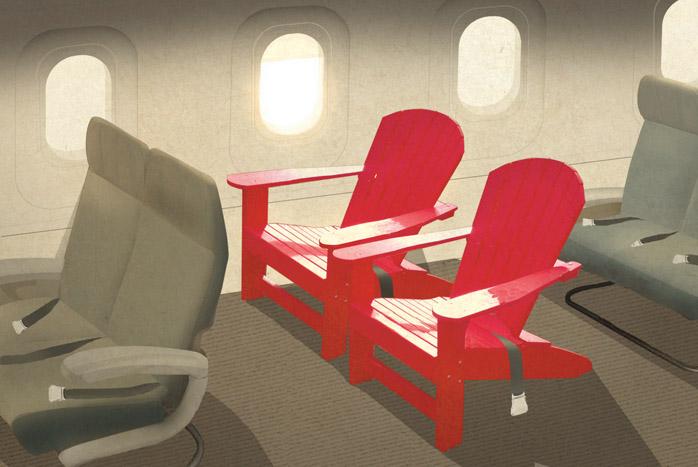 When I stepped off the plane in September 2013 into Heathrow Airport, lugging along two enormous suitcases and running on two hours of sleep, all I wanted was to collapse into a bed. Yes, I finally had made it abroad, and yes, my adventurous junior fall semester in England was about to begin. But first, I needed sleep.

When Professor of English Susan Perabo met my classmates and me outside our terminal, though, I learned that my wish for a 12-hour nap was not about to be granted. She handed us each 20 British pounds and two maps: one of the London Underground and one of Central London. “I’ll meet you guys back at the hotel!” she said, and sent us on our way.

Two hours and four blisters later, I had maneuvered my way through a foreign transportation system with my group and made it to our hotel with our embarrassingly large suitcases. It was here, 3,500 miles away from Carlisle, where I first felt like a real, accomplished Dickinson student.

That isn’t to say that my classes and on-campus involvement in my first and sophomore years weren’t rewarding. Saying goodbye to my roommates and my favorite classrooms in East College was certainly difficult. But it was when I allowed myself to leave those familiar comforts and throw myself into the biggest challenge of my life thus far that I discovered how able I am to thrive, academically and culturally, in a world beyond the red Adirondack chairs. Many of my classmates and I learned that, as Mike Monahan, associate provost and executive director of the Center for Global Study & Engagement, puts it, “study abroad is, above all, an intellectual project.”

Palmer Murray ’15 discovered the same in Brisbane, Australia, where he took a course that correlated directly with his job back at home at Webb Mason. Chris Noonan ’15 put his two years of Chinese language study at Dickinson to the test in Beijing. After Professor of English Carol Ann Johnston served as the faculty advisor to the Norwich, England, program in 2000, she launched a creative-writing exchange program, returning to Norwich with eight students two years later and giving them the opportunity to have their writing inspired by some of England’s most beautiful landscapes.

What makes Dickinson’s programs so strong is a focus on the whole student. “The main things that attracted me to Dickinson were its highly recognized abroad program and the very strong lacrosse team,” says Murray. “Dickinson made it so easy for me to participate in both, which is extremely hard to find in a college.”

Caitlin Simpson ’15, a Latin American, Latino & Caribbean studies major, studied in Argentina in the fall and then went to Chile for the spring.

Hongyu Chen ’15 was already studying abroad as an international student at Dickinson, but after learning about the college’s programs, she could not pass up the opportunity to travel to Bologna. “Being an Asian student at an American school who was then studying in Italy gave me a whole new way to understand my own nationality,” she says.

For Casey Colburn ’15, study abroad was about being able to experience something as different as she possibly could. “I chose Copenhagen because I was eager to be in a place that didn’t speak English. I didn’t know a word of Danish, which was actually so exciting for me, and thankfully Dickinson didn’t require any Danish language experience for the program. I got to immerse myself completely in an entirely new language, and I learned so much.”

Of course, we missed the campus. There’s the community: Simpson and Chen missed the personal connections made with faculty, while Murray felt the absence of his lacrosse teammates. But there are also the everyday luxuries: Elizabeth Graye Robinson ’15, who studied in Cameroon, missed daily hot showers and consistent Wi Fi, and Noonan was eager to return to classes taught in his first language.

Robinson recognizes all of these challenges, though, and encourages anyone studying abroad to document as much of it as possible. “Memories of day-to-day activities will fade and only a few big stories will stand out,” she says. “A journal will help you to not forget that each day abroad was special in its own right.”

And those experiences and the confidence gained are what make life at Dickinson post-study abroad so different—and even more meaningful. “When I got back from Copenhagen, I got an e-mail about an opening for vice president of the class of 2015, something I never would have thought myself capable of before studying abroad,” Colburn says. “But I thought about what I had just accomplished the past semester. I had nothing to lose. So I ran for the position, got it and have loved being in Student Senate.” Colburn is now the class president.

Studying in Norwich made Brandon Goldson ’15 realize the limits he had been placing on his future. “Since going abroad, I now see how many more options there are for life after graduation,” he says. “I didn’t want to go too far from home, but now I know I can handle being away, while still maintaining my important personal relationships. Being abroad helped me to create new relationships, and now I know I’m capable of doing that anywhere.”

For Robinson, life in Cameroon opened her eyes to the way she could improve her life back in Carlisle: “All too often, I find myself busy and stressed with what I do at Dickinson, but I’ve learned in Cameroon that we learn so much more about one another, and about ourselves, when we take the time to talk to each other.”