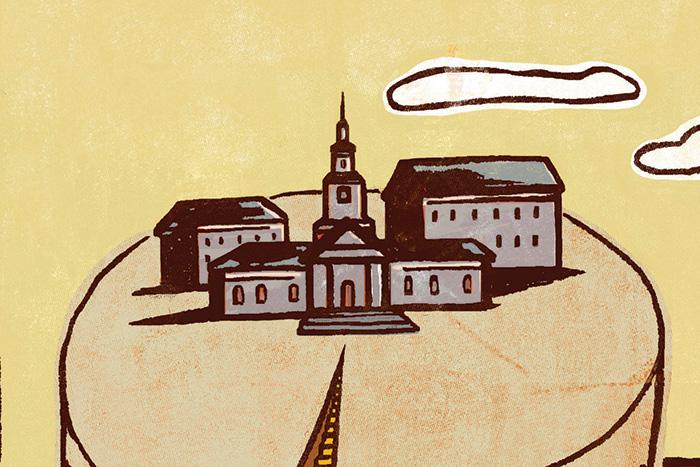 It’s no secret that the future of higher education is uncertain. The media and state and federal government, as well as individual families, continue to raise questions and concerns about the value of a college degree. Many factors are at play, but three stick out: flat or declining family income, decreases in financial aid availability and the changing demographics of high-school graduates. From small private institutions to large public universities, higher-ed leaders are seeking new paradigms and ways to deal with the shifting landscape. Dickinson is no exception.

The Lawlor Groups Trends for 2014 Report cited that 67 percent of families eliminated colleges from consideration at some point in the search and admission process due to cost. While Dickinson’s admissions and aid staff seek to make education affordable, they remain vigilant about not allowing the discount rate (the amount of unfunded institutional aid as a percentage of gross tuition revenue) to rise to the point that it affects our ability to fulfill our mission. While the direct price this academic year is $59,664 (tuition, fees, room and board), what many don’t know is that the cost of a Dickinson education is about $75,000, and the college’s endowment subsidizes approximately $13,000 of that cost. Moreover, 68 percent of the current student population received a further reduction, with $41 million in total institutional financial aid this year.

Dickinson also remains committed to educating the wider world about the value of a liberal-arts education when the question, “Is it worth it?” is on the lips of nearly every parent who sees that price tag. A recent study by the Georgetown University Center on Education and Workforce estimates that by 2020, 65 percent of jobs will require workers with at least some college education. In the U.S. alone, there will be a shortage of five million workers with post-secondary degrees. And proponents of the liberal arts are spreading the word: We know that one-third of all Fortune 500 CEOs have liberal-arts degrees (Huffington Post), and numerous employer-survey results indicate that the critical-thinking skills and the ability to connect disparate topics indicative of liberal-arts graduates are the must-have qualities in job-seekers.

So what’s this “shifting demographics” talk all about? A National Center for Education Statistics report projects that of students graduating high school across the country, there will be a 25 percent increase in African-American students and 42 percent increase in Hispanic students by 2021, but only a 4 percent increase in white students. In addition, in 1994, 63 percent of recent female high-school graduates and 61 percent of recent male high-school graduates enrolled in college in the fall following graduation. By 2012, the percentage of women increased to 71 percent while the percentage of men remained unchanged.

The chart to the left comparing the incoming class of 2008 with the new class of 2018 illustrates these national trends. A more diverse student body has been a long-standing priority for Dickinson, and our definition of “diversity” has grown more inclusive over the years, to encompass race, ethnicity, socio-economic status, religious and political beliefs, sexual orientation, gender identity and expression, international citizenship and first generation to attend college. While a more diverse student body provides a richer experience for the entire community, the challenge lies in ensuring that Dickinson can afford to support the increased financial need that may accompany some of that diversity.

Partnerships with community-based organizations such as Posse Foundation, Philadelphia Futures, College Match and NJ Seeds, as well as with high schools committed to college preparation and access for underrepresented students (Cristo Rey schools, Noble Network of Charter Schools, Mastery Charter and Young Women’s Leadership Schools), are growing. The students from these programs who graduate from Dickinson become some of our greatest champions and most impressive success stories. So while these programs are expensive to maintain, they are imperative. Dickinson is committed to ensuring access but could be doing so much more if the financial resources were available. The admissions team has more applicants they would like to admit, enroll and help succeed, but do not have the funding to make it possible.

In addition, the college-bound population is getting smaller: The National Center for Education Statistics reports that the share of students matriculating for a liberal-arts degree, as a percentage of all college graduates, dropped slightly from 2004 to 2010, from 3 to 2.8 percent. With fewer than 300 liberal-arts colleges in the country, Dickinson is competing for the same talented students with institutions that have larger endowments and can provide more financial aid.

When illustrating the increased pressure faced by colleges and universities, Inside Higher Ed reported that in 2014, 61 percent of admissions directors said they had not filled their fall class by the traditional May 1 deadline. Thirty-two percent recruited applicants after May 1 who had already committed to attending other institutions. Fortunately, Dickinson was not in this position.

While these challenges are, well, challenging, they also are full of opportunities. Among this Web-savvy millennial generation, the Journal of Higher Education Web Professionals found that 70 percent of prospective students are primarily using mobile/tablet technology in their college search. In 2007, 61 percent of colleges and universities were using some form of social media. That same survey conducted in 2014 found the number has increased to 100 percent.

The increased need to “meet students where they are” is leading to innovations in the use of social-media channels both traditional (Twitter, Facebook) and trendy (SnapChat, SCVNGR). And with the national conversation focused on the cost of higher education, colleges and universities are taking a hard look at what solutions they can offer to ease the pressure.