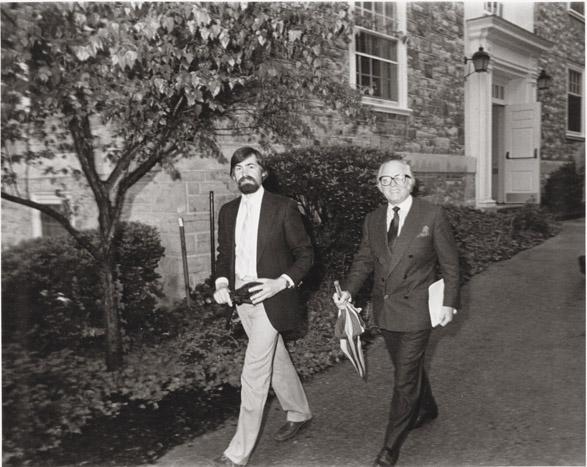 At about the time the fall semester opened this year, I saw a news story about the passing of Sir Richard Attenborough. I recalled that he had been the 1983 Commencement speaker. John Osborne, professor emeritus of history, who had been Attenborough’s liaison during his visit, mentioned to me once how powerful that Commencement address had been and that the students immediately rose to their feet with enthusiastic applause at the completion of his address. We had occasion to digitize a recording of that address, so I had the pleasure of listening to Sir Attenborough just last year.

Throughout its history, Dickinson has welcomed scientists, religious leaders, musicians, military officers, industrialists, poets, athletes, entertainers and elected officials from all levels of government. These visitors have received awards and accolades of every type in recognition of their many achievements. From my own undergraduate days, I recall Seamus Heaney, Dickinson Arts Award recipient, being the Commencement speaker the year I graduated. I remember, too, that Public Affairs Symposium speakers during my years included activist Ralph Nader, Ambassador John Scanlan, and actor Jack Palance.

In my role as college archivist, I frequently have the pleasure of hearing from alumni about their memories and experiences. People have told me about their excitement at meeting authors whose works they admire. They’ve shared stories about dining with dignitaries and having world-famous artists and musicians visit their classes. I recall, most notably, an alumnus telling me about Martin Luther King Jr.’s sermon in Allison Church and how this event cemented his commitment to become a minister.

So I would like to ask all of our readers, what guests to the college do you recall from your own time at Dickinson? Who gave a speech that resonated with you? Who shared ideas that changed the way you looked at the world? Whose visit affected your career choice or other major life decision? Among the many accomplished people who visit Dickinson each year, which interesting personalities had an impact on your life? E-mail your thoughts to dsonmag@dickinson.edu.