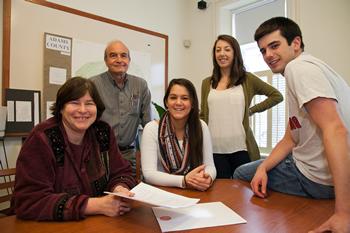 Students to experience the Cuban culture.

Call it a seven-year itch. Susan Rose ’77 has been waiting for another chance to take students to Cuba since her 2004 tour of the embargoed island country. Last semester, she again got the chance and jumped at it

Now, a contingency of 21 Dickinson students and professors, including Rose, will spend spring break in Havana, Cuba, as part of a semester-long study of the country’s economic, societal and agricultural sustainability efforts.

“Given the blockade, we’ve been unable for many years to give students a firsthand understanding of Cuba, its challenges and its achievements,” says Rose, professor of sociology and director of the Community Studies Center. She cites Cuba’s recognition by the United Nations Educational, Scientific and Cultural Organization (UNESCO) for its educational and literacy programs, noting “with the U.S. expanding the license for educational tours to Cuba, we now have the means and permission to put into action what students learn in class.”

The field experience is part of a multifaceted, special-topics mosaic titled Cuba: Economic, Environmental and Social Sustainability and Resiliency. It examines contemporary economic and social conditions and policies, international relations and the ramifications of the 1959 Cuban revolution.

Sixteen students are enrolled, including seniors Joe Benz, Rachel Gilbert and Ana Rader. Each see Cuba through a different academic lens but agree that visiting the country presents an unparalleled opportunity.

“I’ve been trying to find a way to get to Cuba since sophomore year,” says Gilbert, an environmental-science major from Medfield, Mass. Her research on Cuban urban agriculture, coupled with a full year abroad in Cameroon and Costa Rica, ignited interest in pursuing post-graduate research on sustainable urban agriculture in the developing world.

“It’s the forbidden fruit,” says Joe Benz, a history major and Latin American studies minor from Trumbull, Conn., with sights set on producing a documentary film based on the trip for a film class. Benz describes it as “something with a view of the blockade, how Americans view Cubans and vice versa.”

Class discussion, lectures and research in the seven weeks leading up to the trip followed by an in-depth research project upon the students’ return will bookend the study-tour. Rose says students like Benz are already brainstorming project ideas on topics including agriculture, health care, education systems and gender and sexuality.

Part of what excites Rader about traveling to Cuba is gaining an insider’s perspective on the culture and people, specifically the Ladies in White, a Cuban dissident group, that formed in 2003 to protest the capture of their husbands as political prisoners. The group remains active, despite the recent death of their leader Laura Pollan and the release of the original prisoners.

Rader, a women’s & gender studies and sociology double major from Madison, Conn., has conducted extensive research on the group for her senior thesis. While she remains skeptical about the group’s motives and U.S. funding, she hopes to see the Ladies in White march while she is in Cuba.

“My paper thus far has been somewhat critical of the Ladies in White, seeing them not so much as a human-rights group, but more of a subject of the U.S. agenda,” she says. “Being able to actually be there may provide a different perspective and enable me to think more critically. It’s difficult to gain a sense for what is going on based on blogs and news reports because they can be one-sided.”

The demise of the Soviet Union in the early 1990s left Cuba without a source for essential farming products like machinery, petroleum and pesticides, which Koont says forced Cuba to rethink traditional farming methods.

“The book analyzes the political and social context that enabled Cuba to respond positively [to the changes] and start growing vegetables in an organic process near urban settings,” he says.

Another author, Steve Brouwer, will join the Dickinson delegation in Cuba. Brouwer, who is also Rose’s husband, has been on a nationwide book tour promoting Revolutionary Doctors: How Venezuela and Cuba Are Changing the World’s Conception of Heath Care. Cuban poet and filmmaker Victor Casaus, director of the Pablo de la Torriente Brau Cultural Center in Havana, is helping Rose and Koont organize the study-tour. Casaus visited Dickinson in October as a guest artist for the 10th-annual Semana Poética literary event.

The group will stay in the Martin Luther King Center with plans to visit the Cuban National Center for Sex Education, founded by Mariela Castro; the Latin American School of Medicine; and Centro Pablo, where they will meet with musicians, artists and writers.