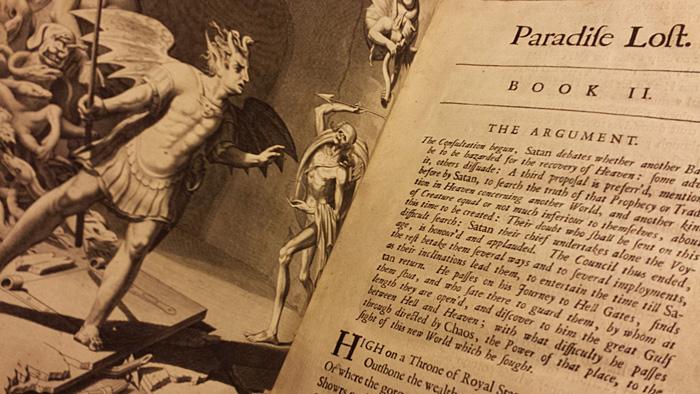 You can neither underline key passages in it nor annotate the oddly spelled, antiquated English verbiage. You can't toss it on your desk or coffee table and pick it up later. You'll find it in Dickinson's Archives & Special Collections, in the lower level of the Waidner-Spahr Library, and you can't even take it out of the room.

But if you can get your hands on Dickinson's copy of the first edition of John Milton's Paradise Lost, you can gain a new appreciation of what is widely regarded as the greatest poem ever written in the English language—and a new appreciation for the physical book itself, as well as the work, standing the test of time.

"[Students] have never seen anything this old or rare," says Professor of English Carol Ann Johnston, whose Milton course will get students acquainted with the book. "They're amazed that [the book] has survived; their textbooks are already falling apart."

This particular edition of the dramatized account of the biblical fall of man, first published in 1668, joins the archives as part of a Miltonian shopping list. College Archivist Jim Gerencser '93 and Johnston drafted the list, and they are elated that the college managed to acquire the book, an opportunity that Gerencser says presents itself about once per decade.

"You have to have a wish list," says Gerencser. "You can't often target your purchases. It's kind of like eBay—things go up and things go down."

While these editions' text may be all but identical, the books themselves will alter how students in Johnston's Milton class view the work, books in general and even today's new reading environment of screen displays.

"They're historical and cultural artifacts that can teach us about how a writer is viewed both in his lifetime and throughout history," Johnston says. Consider, for example, the labor and cost associated with hiring an artist to render illustrations on expensive metal plates. Such an investment is, she says, no afterthought, but rather a manifestation of how a culture values a work. "Producing and presenting a book is a way of broadcasting its status, a way of interpreting and reading it," she says.

In reading and handling different editions of Milton, Johnston's students also will be reading historical contexts from puritanical England to early 21st-century America.

Johnston's Dana Research Intern, Katie Jarman '16, says the book's presence helps bridge the gap between the present and Milton's day. "Milton's very far away from here," she says. "But when you're holding something, it's a totally different experience."