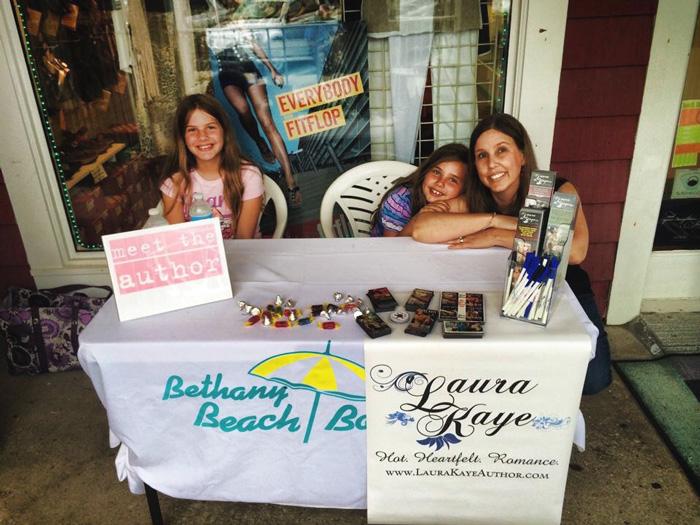 Laura Kamoie '92 took time out over the summer to do a book-signing event (with her kids) during a beach vacation. Photo courtesy of Brian Kamoie '93.

With 'Hard to Hold on To,' Laura Kamoie '92 lands at No. 8 on the 'The New York Times' bestseller list

Laura Kamoie ’92 was recently driving with a friend to her own birthday party when her phone rang. It was her editor, and she was calling to tell Kamoie that her new book, Hard to Hold on To, debuted at No. 8 on the New York Times bestseller list.

“We totally screamed and went crazy,” she says. “I had no expectation of top 10. It wasn’t even on my list of hopes for this and still doesn’t feel quite real.”

While Kamoie, who writes under the name Laura Kaye, has had a lot of success across her 17 books, this was clearly a big deal. She thinks the book’s No. 8 spot might have something to do with her main character and his place in what she describes as a current epidemic.

“The hero of this book suffers from untreated PTSD [post-traumatic stress disorder], depression and suicidal thoughts,” says the former history major, “and I think that really resonated.” Moved by her research, Kamoie donated the first two weeks’ sales of the book to a wounded-veterans group. “It’s not a much-discussed problem, that our veterans are coming back from Iraq and Afghanistan with significant PTSD and suicide issues. The research statistics were overwhelming, and it’s not being handled well yet.”

Kamoie retired from teaching history at the United States Naval Academy at the end of 2013 to focus full time on her fiction writing (her 18th novel, Hard to Come By, comes out in November). But she recently switched artistic gears and tapped her academic roots, writing a historical fiction novel called America’s First Daughter, which will be published in 2016.

“Dickinson instilled in me the idea that you can do anything with a liberal-arts education,” she says. “And I have done two very different things with that education. Both have been very much informed by it: academic historian and bestselling novelist.”

To Kamoie, those things aren’t as different as they may seem.

“Both are about critical thinking, storytelling and writing, which is something that Dickinson emphasized,” she says. “All of my classes emphasized writing skills, even if they weren’t obviously about writing. Now I have this incredible privilege to do something that many people dream about. It’s a dream come true.”