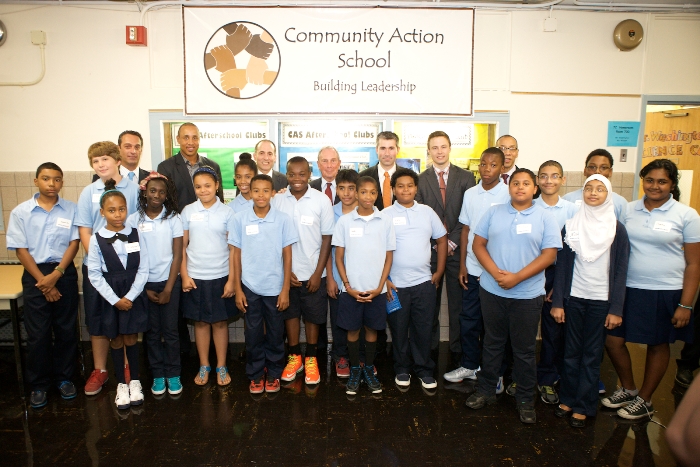 After graduating with his English degree in 2001, Zach Leverenz earned a master’s in education and social entrepreneurship at Harvard and soon found himself drawn to technology’s role in leveling the playing field for marginalized populations. That interest led him to found EveryoneOn, a nonprofit organization that provides affordable Internet access, hardware and free tech training. Read on to find out more about EveryoneOn, Leverenz’s connection to President Obama and what his favorite Hemingway quote is (this week).

Tell us about something great that happened to you at Dickinson.

I met my future wife, Kathleen Wood ’03, at Dickinson, though we didn’t know each other very well at the time. We reconnected in Washington, D.C., and after spending the past five years together, including two in graduate school and two working in the Middle East (a good compatibility test for any couple!), we were married in February.

I came from a small town in rural Appalachia, and the scope and diversity of Dickinson’s liberal-arts education served as my first keyhole view on a wider, more complex world. Dickinson encouraged the 18-year-old version of me—distracted, ambitious, often wrong, always certain—to test all my fledgling interests and assumptions, from philosophy to economics, to creative writing. It was the proverbial spaghetti on the (limestone) wall. I had the room to toss up ideas to see if one might stick.

If I distill the lasting value of a Dickinson education, it is really all about cultivating a sense of identity and self-awareness, a process that good liberal-arts institutions put at the core of the curricular experience and then expertly facilitate with a deft hand.

What inspired you to found EveryoneOn?

You could say it happened “by accident”—I grew up in Accident, Md., a town of 350 people near West Virginia. My deep commitment to distributing opportunity equally is born from personal encounters with people from places like Accident, where generational poverty and opportunity gaps often lead to deleterious outcomes around employment and economic independence, college attainment and health.

[After Harvard] I spent two years as the CEO of Middle East Education through Technology (MEET), an MIT-based tech and social-justice organization working with young Palestinians and Israelis in Jerusalem and the West Bank. The timing also gave me a close view of the revolution in Tahrir Square and the unprecedented use of technology to effectively mobilize and organize the populist cause.

With your ethos in place, what approach has EveryoneOn taken to making it a reality?

When we returned [from the Middle East], I wanted to test how technology could be applied to democratize education and opportunity in our domestic context, where 60 million Americans—disproportionately low-income and minority—are still unable to afford Internet access at home.

EveryoneOn is designed to eliminate the digital divide by making affordable high-speed Internet, computers and free training available to all. Through cross-sector partnerships with the nation’s leading Internet, device and content providers, we are able deliver affordable technology with immediate scale. Today over 36 million people across 48 states are qualified and in-coverage for EveryoneOn’s $10-per-month broadband services and $150 tablets and laptops.

We also have another Dickinsonian on staff. Cara Wilner ’11 is EveryoneOn’s program coordinator and is a huge asset to our team.

You recently were at an event with President Barack Obama?

In February, President Obama announced the Federal Communications Commission would reform the E-Rate Program, in part doubling the amount of money devoted to providing high-speed broadband to schools, serving 20 million students over the next two years. The plan aims to solve one of the most critical issues facing U.S. education—equitable access to new classroom technologies.

Despite the immense promise of this investment, we risk deepening existing achievement gaps for low-income students without an approach that creates digital equity both inside and outside of the classroom. That’s where EveryoneOn comes in. We were invited to work with the White House, U.S. Department of Education and a host of private tech and software companies to ensure that every student has “anywhere, anytime” access to all the technologies that are proven to improve their learning outcomes.

And speaking of meeting with someone famous, if you could have dinner with a famous person, living or dead, who would it be?

I think I’d choose to spend a Saturday evening at Gertrude Stein’s salon on the Left Bank with all her “lost generation” artists and writers. Such a talented and tortured bunch—I bet the dinner conversation would be fascinating. And I certainly would try my best to coax something outrageous and quote-worthy out of Hemingway, who was the focus of my senior English thesis. Of course, he usually didn’t need much soliciting. My favorite Papa quote this week: “Always do sober what you said you’d do drunk. That will teach you to keep your mouth shut!”