Of Dover and Design 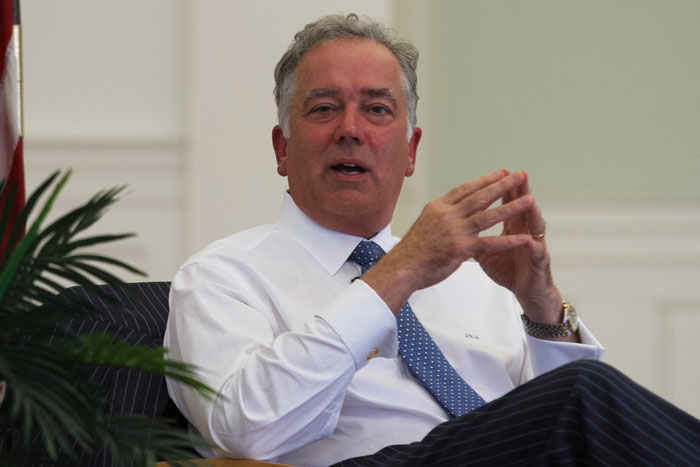 The following Q&A with Judge John E. Jones III ’77, in which he discusses his decision in the Dover v. Kitzmiller case, first appeared in the spring 2006 issue of Dickinson Magazine.

U.S. District Judge John E. Jones III ’77 found himself at the center of the culture wars in late 2005, when he presided in Harrisburg, Pa., over Kitzmiller v. Dover Area School District. The case was the nation’s first legal challenge to intelligent design—which posits that life systems are so complex that natural selection can’t explain them. The lawsuit was brought on behalf of parents in the York County school by the American Civil Liberties Union and Americans United for the Separation of Church and State, an organization led by Barry Lynn ’70. The plaintiffs asserted that the Dover School Board violated church-state separation when it ordered students to listen to a statement promoting intelligent design as an alternative to evolution. Jones struck down the teaching of intelligent design on Dec. 20 in a decision that severely took the Dover School Board to task. In January the judge, who will receive an honorary degree and be Dickinson’s Commencement speaker on May 21, discussed the case with Sherri Kimmel, editor of Dickinson Magazine.

I understand that early in your career you worked with a Dickinsonian who was a judge, Guy Bowe ’40. What did you learn from him about running a courtroom?

To have an evenhanded demeanor, to treat everybody in a way that’s civil, to provide access to the court system, that judging is a great profession. He really inspired me to want to become a judge. And that’s really all I wanted to do. Now, I took detours. I ran the [Pennsylvania] Liquor Control Board and ran [unsuccessfully] for public office, but my overarching goal was always to be a judge, and I can’t think of a better thing to be doing. To have achieved a federal judgeship is a remarkable thing in terms of what I thought that I could do coming out of a small town [Pottsville, Pa., where he still lives] and a relatively small-county environment. So I feel very blessed, that I had the opportunity to do this. I very frequently wish that Guy Bowe [now deceased] could see me.
So what do you think Guy Bowe would have thought of your 139-page Dover decision?
I hope he would have liked it. It’s very difficult to know how he would have analyzed the opinion. I’m certain that he would be proud of how I ran the courtroom. I got a great deal of cooperation from the lawyers, from the spectators. There was appropriate decorum. And so I think he would probably look at that before he looked at the opinion.
Much has been made in the media of the wit and humor that you displayed in the courtroom. What is the role of humor in the courtroom?
Well, your personality is what it is. And I see everything, generally, in a fairly funny light. As I said to folks during the trial, there is a fine line between good humor in the courtroom and My Cousin Vinny. I find that the courtroom is an entirely stressful place. There’s a lot of combat that goes on amongst the attorneys, and a quick quip or an aside will tend to almost act like a blow-off valve and make people feel less contentious, less stressed.
We were talking a moment ago about The New Yorker piece and the Harper’s piece about the trial. Were you surprised at the media attention that accompanied this case?
Oh yeah. I knew from the inception that it was going to attract attention. I had no idea that it was going to attract the attention that it did. When I went on the bench the first day of the trial I remember looking around the courtroom and I thought, “Oh my,” because the jury box was full of press. We were wall to wall in the back. Most times we labor in relative obscurity in the courts. If we have interested parties and a spectator or two, that’s a lot. Every day the courtroom was packed with spectators and press. I think the decision made the front page of virtually every paper in the United States on the 21st of December. And it continues, because last Sunday, if you read The New York Times Magazine, William Safire dissected some of my language—“breathtaking inanity” [how Jones described the school board’s policy]. And it was OK … although he did take issue with the fact that I used “which” in place of “that;” I always get the two mixed up.

Well, I guess some people transpose it as “breathtaking insanity.”
That was his point, exactly, that some people said insanity, and he said there’s a difference between inanity and insanity, and there is. I didn’t mean insanity. I meant what I said—inanity.