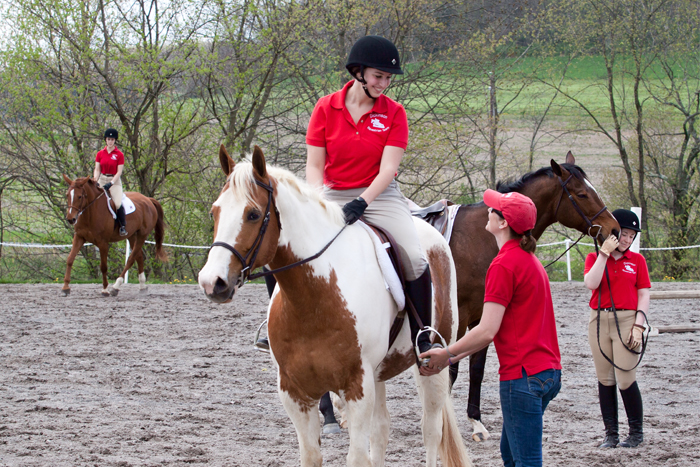 Imagine mounting a 1,000-pound thoroughbred, adjusting the reins and guiding the horse into a ring to compete. You feel the pressure of the competition, the eyes of the crowd, the surge of adrenaline. But there’s another factor jangling your nerves—you’ve never seen, much less ridden, this horse before.

It’s akin to a varsity baseball player donning someone else’s glove or swinging a strange bat at every game, or a tennis player wielding a foreign racket during a match. Each sport has tools that are part of an athlete’s repertoire and enhance his or her abilities. But for riders in the Intercollegiate Horse Show Association (IHSA), the horse they will ride in any given competition is determined by luck of the draw.

Competing in the equestrian arena requires physical strength and athleticism, financial means and an emotional bond between horse and rider. It also appears to be an affinity acquired at a young age, at least for the 33 members of Dickinson’s Equestrian Team, a subset of the Equestrian Club. Becca Fine ’13 started at 9; Kim Spackman ’11 at 8; Liz Mudge ’14 at 6. Christina Wolf ’13 recalls being first “tossed up onto a horse by my aunt when I was 3.”

Those early experiences led to a lifelong love of being in the saddle, and many of the team’s members came to Dickinson with years of experience and competition under their stirrups. They also narrowed their college searches to schools with equestrian teams.

“I had to have riding,” says Spackman, a history major and central-Pennsylvania native. “It wasn’t an option. I also wanted strong academics and study abroad. My mom is a Dickinson alumna, and she said, ‘Dickinson has everything you want.’ She was right.”

“I’ve been exposed to the professional side of competitive riding, and that’s not really something I want to go into,” says Grace Glover ’14 from Fairfield, Va., who finished high school a year early and spent what would have been her senior year competing at the national level. She qualified for nationals and competed last fall, placing fifth out of 250. “Some of my peers went to schools with NCAA teams, but academics are my first priority.”

“In a regular show, you use your own horse and it’s all individual,” explains Wolf, an art & art history major from Mount Wolf, Pa. “In intercollegiate, the host school provides the horses, and it’s basically drawn from a hat. There are more advanced horses and less advanced horses, but it is judged completely on the rider.”

Before each show, the coach selects a point rider in each class (e.g., over fences or on flat ground, open or novice). The other riders can participate, but their points only count toward their individual accumulation and not toward the team’s total. At the end of each competition, the judges name a champion and reserve high-point team and a champion and reserve high-point rider.

While Penn State has a tendency to dominate the region due to size and funding, “The Dickinson team has been growing each year not just in numbers but in terms of competing better within our region,” according to Spackman.

In fact, this has been a banner season for Dickinson, which has had an Equestrian Club for about 30 years. For the first time in its history, the team placed second (reserve high-point team) in the region, behind Penn State.

Two riders competed in the IHSA National Finals May 5 in Lexington, Ky.—Mary McClintock ’11 from West Bath, Maine, earned seventh place in novice over fences, and Spackman earned sixth in novice on the flat.

While the success is celebrated, the women are equally excited about the atmosphere and camaraderie the team cultivates.

“Horseback riding in general is just you and the horse,” says Mudge from Nashua, N.H. “Sure, there are people who help you, like coaches and trainers, but on a team like this, you’re all helping each other.”

“It’s a wonderful group of girls,” Spackman adds. “We have such different backgrounds—a lot have grown up riding, some have Western backgrounds, some have never ridden before. But there’s such a good sense of team spirit.”

“I remember meeting some of the girls at the activities fair [as a first-year],” says Wolf. “I saw how tight-knit they were, like a family. At first I was nervous— would they accept me into their group? After the first horse show, we were united. We’re all there cheering, helping each other—it’s a great bonding experience.”

A key factor in that bond is Coach Lindsay Vulich, a trainer at Outlaw Stables in New Bloomfield, 40 minutes from campus, where the team practices. Vulich has been coaching the Dickinson riders since 2004.

“She’s interested in us not only as athletes but personally as well,” says Wolf. “She’s very patient, fair and level-headed, which makes her a great role model for all of us girls. And she has a rule about no cattiness.”
Glover, who worked with several top coaches before Dickinson’s, agrees and adds, “It’s nice to know that our coach just wants us to enjoy ourselves. Obviously, success is great, but she understands the pressures of school, of other things in life.”

Whether she’s shouting encouragement from the center of the ring during lessons or cheering from the sidelines during competition, Vulich’s passion is evident. “I want the very best for the club,” she says. “Some teams are cutthroat; some are all fun and games. I think it’s important to balance being competitive and having fun.”

The combination of regional success and a strong team dynamic raises questions of what’s ahead. As one of more than 130 clubs at Dickinson, the Equestrian Club receives limited funding from Student Senate. The women handle their transportation to and from events and practices and purchase and maintain their own tack. Several brought their horses from home to Outlaw Stable.

Being a club also means it’s open to everyone (including men, although none are on the current roster), and according to Fine, a policy-management major from Medina, Wash., “there has been a sudden influx in interest from freshmen. The club had fewer than 20 members last year, and we have more than 35 now. The first-year class almost doubled our size.”

“I’m a tour guide, and many prospective students ask about the equestrian program,” Wolf says. “It’s a real draw for Dickinson, but we need to get the word out more. Since we’re not on campus, people don’t witness us competing. If we were a varsity sport, it would legitimize what we do.”

Spackman agrees, stating, “Prospective students are looking at Dickinson because it’s a good school with a good reputation but also because we have a good equestrian program. We’re doing well with what we have, but we feel worthy of more.”

Jessica Wahman, advisor to the club and associate professor of philosophy, has seen the growth as well. “These students are so dedicated and motivated, more active on campus and in recruiting and getting more competitive in the region,” she says. “They’ve got something to keep an eye on!”