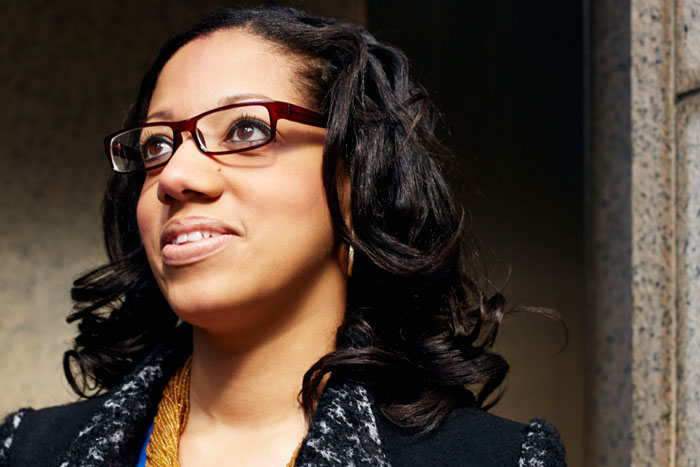 Embracing Plan B with Nsenga Jenkins '07

It’s the stuff that dreams are made of: An inner-city kid earns a scholarship, goes to law school and accepts a coveted position with one of the nation’s top-three broadcast networks. But Nsenga Jenkins ’07’s path to success was anything but dreamlike, and there were times when her aspirations seemed far out of reach.

“There was at least one moment when I seriously considered giving up,” she remembers. “But I’m not a quitter, and I knew that there were people who believed in me. So I decided that if I couldn’t get where I want to go the traditional way, I had to look for a different path.”

A first-generation college student with a stellar academic record, Jenkins dreamed of becoming a lawyer. With financial support from Dickinson, she came to campus as a Posse Foundation scholar, and was surprised to learn that the New York public-school system hadn’t adequately prepared her for the academic rigors ahead.

“It was discouraging, because I was used to succeeding and, suddenly, I was struggling in class.” she says. “I didn’t know if I’d make it through.”

A turning point arrived when she enrolled in an introductory philosophy course, discovered a love of the subject and found a mentor in Professor of Philosophy Susan Feldman. “One of the things she taught me was that if I wanted to succeed, I had to do something I loved and really throw myself into it,” says Jenkins. “So I declared a major in philosophy, and my grades immediately began to improve.”

That approach also worked wonders for Jenkins’ language proficiency. After struggling in Spanish classes for several years, Jenkins declared a minor in the subject and spent  the summer and fall of 2006 studying abroad in Dickinson’s Málaga program. She returned fluent—just in time for her final semester.

As her grades improved, Jenkins grew more interested in law and public service, thanks to her involvement in service and mentoring organizations, the Dickinson Law Society and the mock trial team. But as graduation neared, she began  to lose hope that she’d realize her dream. “I didn’t even sign up for the LSAT, because I didn’t think I could get into law school,” she remembers, explaining that although her GPA had improved, it was still not up to snuff.

Her law & policy professor, Dauphin County judge and longtime Dickinson adjunct instructor John Cherry, encouraged her not to give up. Cherry suggested an internship with the Dauphin County, Pa., courts and recommended that Jenkins work in the field for a few years.

“Nsenga worked hard for everything she had, and she received beautiful support and training at home. But she was grasping for a future, and I don’t think she realized the great gifts she had, particularly her special gift for communicating with young people,” Cherry says. “I suggested she get her feet wet not only so she could gain some experience but also so she could gain some confidence and realize what she could do.”

So Jenkins worked as a juvenile-probation officer  in Harrisburg, investigating county cases and presenting recommendations to the judges. “It was a great experience, and after two years on the job I got that itch to do something new,” she says. “That something new was law school.” She decided to work in New York City’s family-court system while attending New York Law School.

She got the job and, a year later, enrolled in New York Law School. She served internships in a county supreme court, in the litigation division of the nation’s largest housing preservation and development agency and in an entertainment-law office. In 2013 she passed the bar in New York and New Jersey on first try. Last fall, a contact she made during her final internship alerted her to an entertainment-law opportunity at ABC News. Naturally, she leapt at the chance.

Now, as part of the ABC newsroom’s rights and clearance department, Jenkins ensures that all third-party content aired on World News with Diane Sawyer and This Week with George Stephanopoulos has been cleared for broadcast. The 24/7 news cycle keeps her tethered to her iPhone, but Jenkins enjoys  the fast-paced, high-profile job and is excited about the opportunities to come.

Meanwhile, she stays in touch with her Dickinson mentors—whom she calls “life mentors,” because their influence reaches far beyond her academics—and continues to live by their advice.

“At Dickinson, I met people who encouraged me and allowed me to discover what I really loved, and I’ll always be grateful for that,” she says. “What I learned from them is that if you follow your dreams and work hard enough and long enough, you can accomplish whatever you want.”

Read more from the spring 2014 issue of Dickinson Magazine.