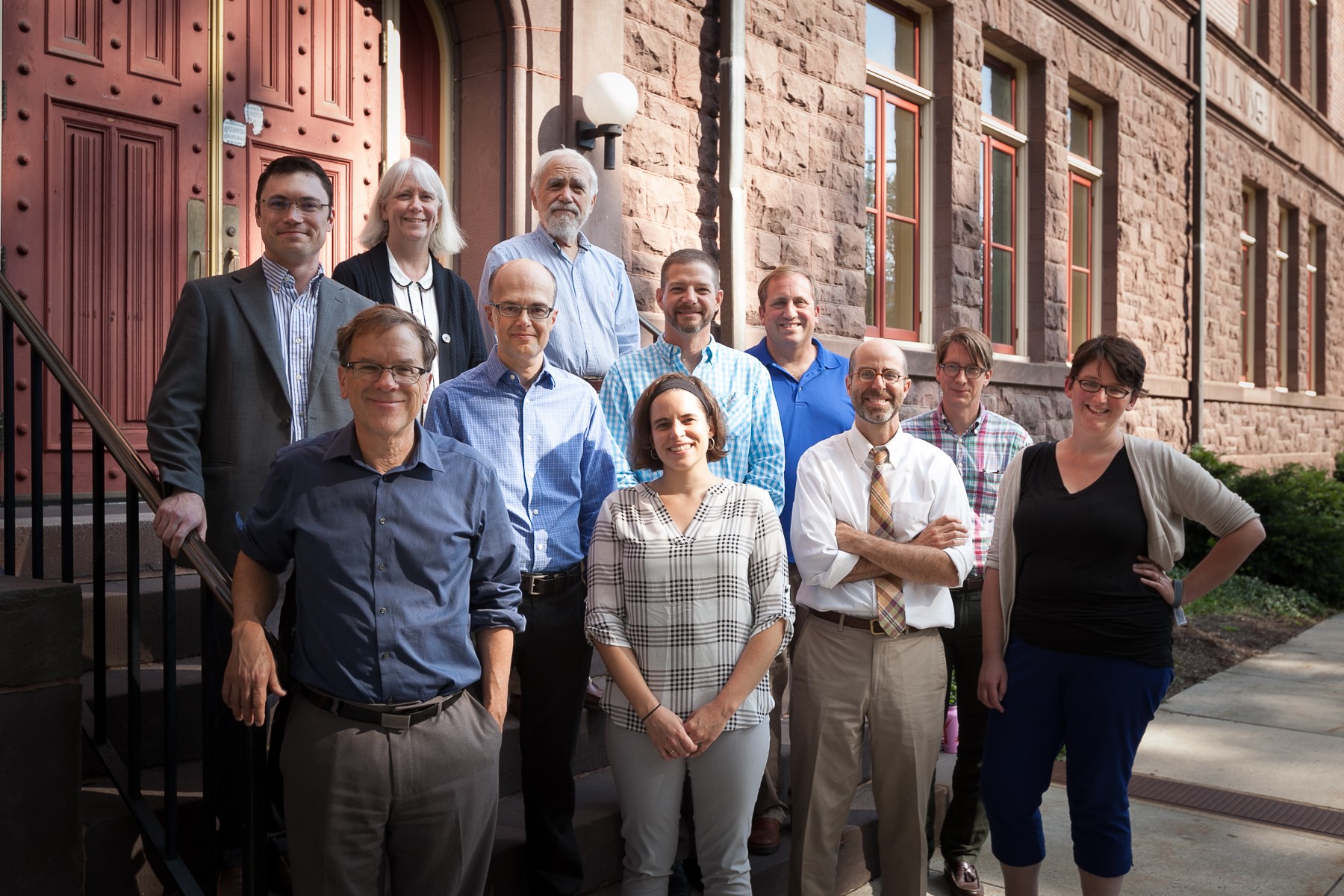 The Dickinson history faculty in front of Denny Hall, Sept 2017

Assistant Professor Say Burgin has signed a contract with New York University Press for her new book, Organizing Your Own: The White Fight for Black Power in Detroit. She is also working as a consultant on a curriculum package to be used for educators alongside the forthcoming documentary The Rebellious Life of Rosa Parks, in production with Peacock.

Professor David Commins' book, The Mecca Uprising:  An Insider's Account of Salafism and Insurrection in Saudi Arabia by Nasir al-Huzaimi, about the 1979 uprising in Mecca, Saudi Arabia, was published in December 2020.  The book has two parts:  translation of a memoir by a man who belonged to the group that launched the uprising, and an introduction to the historical, political and religious contexts surrounding the uprising.

Associate Professor Emily Pawley's book, The Nature of the Future: Agriculture, Science, and Capitalism, was published by the University of Chicago Press in Spring of 2020. On June 8 2020, she gave a virtual book talk, which is available to view online here:  http://newnatures.org/greenhouse/events/online-book-talk-emily-pawley-the-nature-of-the-future/

Professor Matthew Pinsker directed a three-week on-campus summer seminar in July 2021 for regional high school students that provided free college credit and a rigorous orientation to the liberal arts as part of the Knowledge for Freedom program funded by the Teagle Foundation in New York.  In 2021, Prof. Pinsker's Dickinson & Slavery initiative created a walking tour on campus around a series of new wayside markers and also hosted a public renaming ceremony for Pinkney Gate and Spradley-Young Hall.  This ceremony culminated three years of work at raising awareness about the college's history with slavery and antislavery and took place in the presence of descendants of the newly honored figures, formerly enslaved campus icons Carrie and Noah Pinkney, Henry W. Spradley and Robert C. Young.  Finally, the House Divided Project (which Prof. Pinsker directs), continued its longstanding partnership with the National Park Service, developing a major online resource on slave stampedes or group escapes from slavery and a new interpretive handbook for the Underground Railroad.

Professor Karl Qualls' recent book Stalin's Niños: Educating Spanish Civil War Refugee Children in the Soviet Union, 1937-51 (2020) has been selected as the Featured Book for the Society for the History of Childhood and Youth. His interview with SHCY will appear in March 2022. He recently published “Politicizing War Memorialization in Soviet and Post-Soviet Sevastopol” in The Memory of the Second World War in Soviet and Post-Soviet Russia (2021) in which he brings up to date his first book From Ruins to Reconstruction: Urban Identity in Soviet Sevastopol after World War II.

Assistant Professor W. Evan Young spent the 2019-20 academic year in Japan through a D. Kim Foundation Postdoctoral Fellowship to develop his project,   "Health and Home in Modern Japan:  A Cultural History of Domestic Medicine, 1850-1960."  In early 2020, he published a related chapter in Japanese, "Jokunsho to igakuchishiki no keimō" (Women's didactic literature and the dissemination of medical knowledge), in the volume Kangaku to igaku (Sinology and medicine).

On Feb. 16, 2018, the History Department held its first Alumni Forum, inviting nine alumni with Dickinson history degrees back to historic Denny Hall to talk to current students, faculty and staff about their diverse career paths.  Our alumni guests spoke eloquently and enthusiastically on a range of topics, offering advice on everything from achieving work/life balance, to managing finances in the early years after graduation, to navigating career-path changes.  One thing all of our alumni guests agreed on was the continuing relevance of the study of history in today's rapidly changing world, and the value of the knowledge and skills they gained as Dickinson history majors.  We hope this event will be the first of many to bring history alumni back to campus!  Read more here.

How Alumni Can Stay in Touch

The history department enjoys hearing from our alumni. Please let us know what you are doing by sending an email to brownmad@dickinson.edu  and including "Alumni News" in the subject line. You can also connect with us via the department Facebook page.