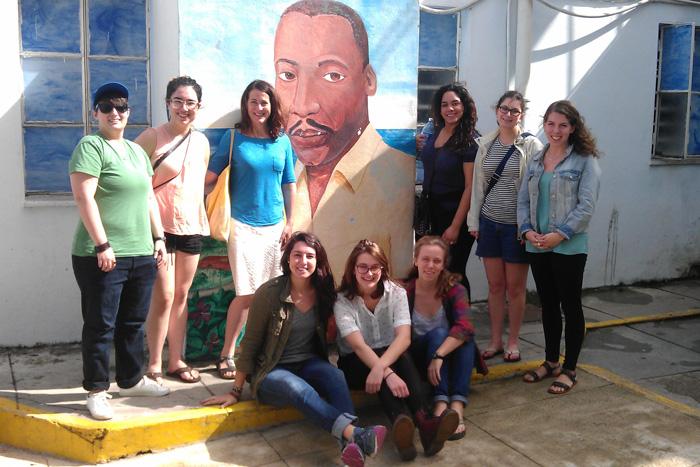 President Obama embarks on his historic trip to Cuba this month, underscoring and cementing a dramatic shift in U.S.-Cuban relations during his presidency. The trip arrives approximately two years after Cuban President Raul Castro announced the restoration of full diplomatic relations with the United States and at a time of astonishing social change in Cuba. And this spring, Dickinson students were there to witness expressions of those cultural shifts in the making.

Ten students traveled to Cuba in January to take part in a mini-Mosaic, a distinctive brand of learning at Dickinson that combines intensive, interdisciplinary research with global study. Through the course, they investigated the role of written and audiovisual media in Cuba’s changing socioeconomic policies, international relations and expressions of collective identity. After learning in the classroom about Cuban literature, art and film, the students had a chance to meet some of the artists whose works they’ve studied and study firsthand the ways Cubans maintain their dynamic culture in the face of changing technologies, policies and politics.

Each participant had taken courses in Spanish language and was actively enrolled in a Spanish-language translation class and/or a class on Cuban cinema. While they translated a variety of contemporary essays, short stories and poems, the Spanish-language students paid attention not only to the theoretical issues that vex all cross-cultural translators but also to major themes in the work. Students in the cinema class analyzed the ways film and documentary media shape the presentation of history, culture, gender, sexuality and politics.

Once in Havana, the research teams got a behind-the-scenes look at how cultural projects are imagined, funded, promoted and remembered in Cuba today, by meeting with writers, translators, directors, scholars and artists. They also conducted translation projects in key cultural sites, including the International School for Cinema and Television in San Antonio de los Baños, UNEAC (Unión de Escritores y Artistas Cubanos) and La Universidad de Habana.

Madeline Chandler ’16 (Spanish, psychology), who is enrolled in the translation class, enjoyed working directly with poet Roly Avalos Diaz after studying and translating his work in class.

“Just having the opportunity to visit Cuba, a country that has been closed off from the rest of the world for so long, was simply incredible, and it was truly an unforgettable experience to take what we had been learning in the classroom all semester and see it brought to life,” says Chandler, who continues to work with Diaz on translations of his work and will share those texts with the Dickinson community in a forthcoming blog. “I could ask Roly any questions I had and hear what his influences were—things that one normally cannot get from a text.”