New Dickinson Faculty Book Explores 'Interest,' a Word That May 'Explain the World' 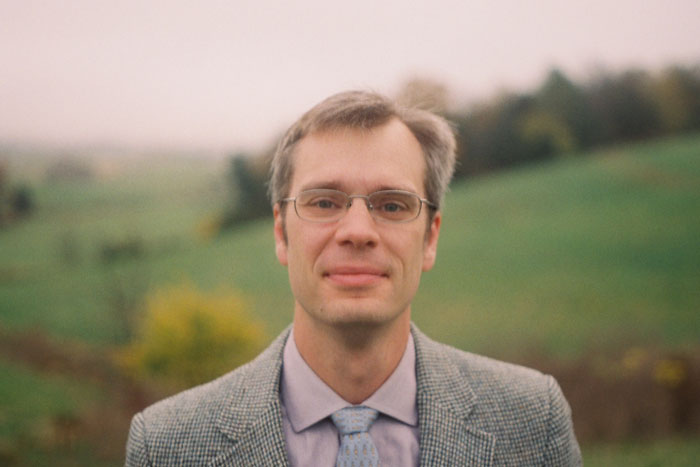 Can a single word explain the world? Jacob Sider Jost, associate professor of English, sets out to explore the issue through the word “interest” in his new book, Interest and Connection in the Eighteenth Century. What he discovers is that the word is foundational across the varying spectrums of finance, economics, politics, psychology and aesthetics—allowing writers to make connections among different spheres of 18th-century life and explore diverse but connected facets of the human condition.

“Sparked my interest”—I appreciate you getting the word into the open right away. This book began when I read Daniel Defoe’s Robinson Crusoe with an extraordinary group of Dickinson English majors in the fall of 2012. We noticed how that famous novel is really two stories: a ripping adventure tale and the careful record of a man accumulating money. In other words, it made compound interest interesting. This observation—which became a journal article—set me off looking for other places where the different meanings of interest overlap in Defoe’s century.

Your publisher’s writeup begins, “Can a single word explain the world?” Can it? And how?

The words people use teach you a lot about how they think. Here’s a modern example: imagine three different websites that link you to other people. On one site, they’re “friends,” on another, they’re “contacts” and on a third, they’re “followers.” Those are three pretty different metaphors for thinking about what connects people to each other.

Eighteenth-century men and women thought about people as belonging together in “interests.” Being “in someone’s interest” or “having an interest with someone” was a connection that combined loyalty, affection, deference and concrete benefits—come to think of it, it actually combined features of “friend,” “contact” and “follower” in a single concept. Understanding the word allows us to reconstruct how people of the time related to each other. And they used the word “interest” in lots of other ways too: to talk about money, psychology, politics, even love affairs—a sense we still use when we talk about “being interested” in someone.

Writing this book, did you come away with enough research where you could write another book focusing on the same word but, say, in the 19th or 20th century? Or how about a different word?

The neat thing about “interest” is that it’s one of those words whose meaning has changed enormously over the last few hundred years. Jane Austen fans will know examples of many other words like this—“nice” used to mean more or less the opposite of what it does now, for instance. I originally wanted to carry the book up to the early 20th century, but there was just too much material.

The theme of “interest” as a way of talking about connection runs through the whole book, but I’ll just give one example here: the abolitionist Olaudah Equiano, who had himself been emancipated from slavery, entitled his autobiography The Interesting Narrative of the Life of Olaudah Equiano. In modern English, “interesting” can be a pretty mild term; if you saw a movie and didn’t love it, you might tell your friends it was interesting. In the 18th century, which is when the word “interesting” originates, it was much stronger. Things like suicides were described as “interesting.” The point of Equiano’s title was not that he thought that the slave trade, which had a decisive role in his own life, was an interesting topic in our modern sense. He wanted his readers to care emotionally about it, and to get together—to form a political interest, that is—to get rid of it. His goal in describing his life as “interesting” was to invite a connection with readers that would allow him to get something done.

What’s the most out-of-the-way fact you learned while writing this book?

You may have heard someone say that there’s an “ancient Chinese curse” that goes “may you live in interesting times.” Since the adjective “interesting” doesn’t exist in English before the 18th century, and doesn’t exist in ancient Western languages like Greek and Latin, I tried at some point to figure out what the original meaning of this supposed curse actually was. And of course I found out that the whole thing is a 20th-century English invention. My takeaway, and advice to everyone, is to regard supposed “ancient Chinese curses” you find on the internet with healthy suspicion.