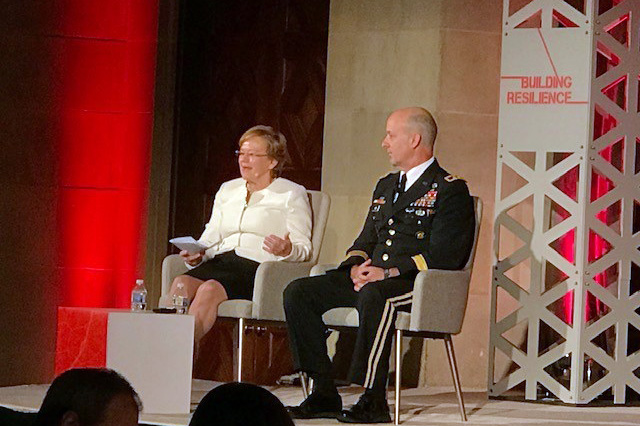 More than 500 national leaders meeting in Washington, D.C., recently heard about the role Dickinson and other colleges and universities can play in helping local communities prepare for and recover from disaster.

President Margee M. Ensign and U.S. Army War College Commandant John Kem were featured speakers and highlighted the long and successful partnership between their two institutions, including a new graduate program and an initiative focused on developing evidence-based research to aid in the response to humanitarian and natural disasters.

While many of those involved in responding to disaster have valuable experience, their knowledge is often fragmented or siloed, and the field is plagued by a lack of research and evidence-based solutions for effective response. Kem discussed the long history of collaboration between Dickinson and the U.S. Army War College, and their goal to work together to advance the field of peacekeeping and disaster emergency preparedness, response and recovery.

Kem and Ensign made their remarks during the 8th annual Building Resilience Through Private-Public Partnerships Conference hosted by the U.S. Chamber of Commerce Foundation. Individuals from the Federal Emergency Management Agency, U.S. Northern Command, the Pew Charitable Trusts and the United Nations joined businesses such as FedEx, UPS and Medtronix and nongovernment organizations to discuss practical ways private companies can work with public agencies more effectively to serve communities preparing for and recovering from increasingly common national disasters such as severe weather events.

“Colleges and universities have a crucial role to play, and they should not be left out of the equation,” Ensign told those gathered. She said many colleges and universities are already deeply connected with their local communities. She pointed to a collaboration between Dickinson, the Borough of Carlisle and the Greater Carlisle Project. Dickinson students conducted research using the City Resilience Index (CRI)—a framework developed by Arup International and supported by the Rockefeller Foundation. This marked the first time in the world the index had been used.

She also highlighted an upcoming semesterlong Mosaic program through which Dickinson students will work with several professors from different disciplines to research ways in which Carlisle could become a more resilient and sustainable community.

Ensign pointed out that in the past, the United States used to fund the education of future leaders from around the world studying at American colleges and universities. While that program no longer exists, Dickinson has launched a bridge program to educate refugees whose educations were interrupted by conflict or natural disaster and prepare them for college.

Both at Dickinson and in her previous role as the president of American University of Nigeria, Ensign said she has witnessed the power of colleges and universities to make a dramatic impact in their local communities. She called on those in attendance to reach out to colleges and partner with them to build more resilient communities.