Four-Time Survivor Shares What He Learned While Whipping Cancer 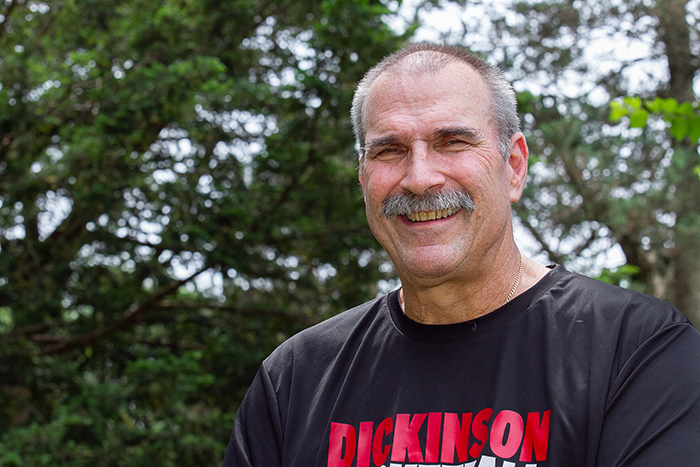 The first time he was diagnosed with cancer, Jeff Cohen ’79 was young, single and just getting his career off the ground. The second time, he was a husband and new father with an expanding clientele. The third and fourth times, he had two daughters and a high-octane financial-services career.

How did he thrive in the face of repeated life-and-death challenges? In writing and in a recent conversation, Cohen discussed the lessons learned that prepared him to persevere, day by day. 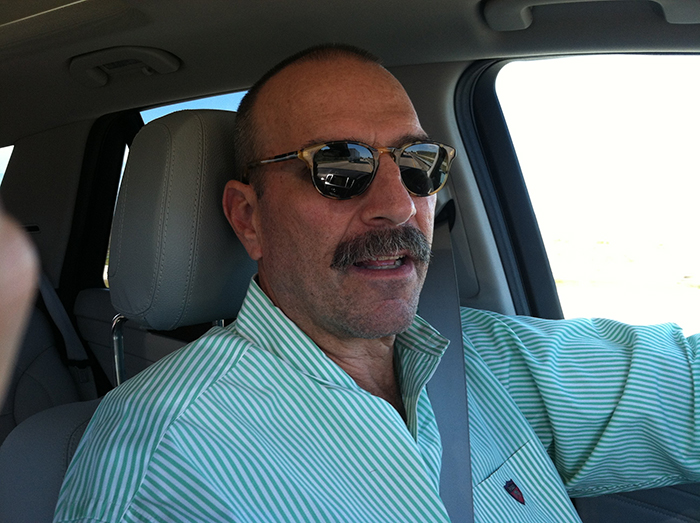 The oldest of three brothers, Cohen looked every bit the basketball star as a kid—he’s now a towering 6’8”—but running and jumping didn’t come naturally. So with a high-school coach’s encouragement, he did daily basketball drills to up his game, practicing full days over the summer while working summer jobs by night. It paid off: He was admitted to Colgate, a Division I college. But on learning he wouldn’t get time on the court as a first-year student, he transferred midyear to Dickinson, a college where he could play.

Cohen joined Phi Kappa Sigma, declared a history major and secured the keys to the gym so he could continue to perfect his game after hours. He was named team captain during senior year, and after graduation, he worked as a college basketball coach at three state universities before transitioning to sporting-goods sales, and finally, into the financial-services field.

Cohen was 28 when he learned he had colon cancer. He opted for an experimental surgery at Mt. Sinai Hospital, but he had second thoughts after meeting a hospital roommate who’d had a similar procedure.

“He was a Vietnam helicopter pilot, and he looked like death warmed over,” Cohen remembers. “He told me that he’d been shot out of a plane in Vietnam, and the surgery was worse than that. So I took off.” Still in his hospital gown, with IV in tow, Cohen stormed toward the hospital exit; the staff caught him before he reached Seventh Avenue, and convinced him to have the surgery.

A few weeks later, he was back on the basketball court, with a new lease on life. “I thought that would be the end of it. When you’re that young, you think you’re indestructible,” he remembers. “I didn’t think it would be a lifelong trend.” 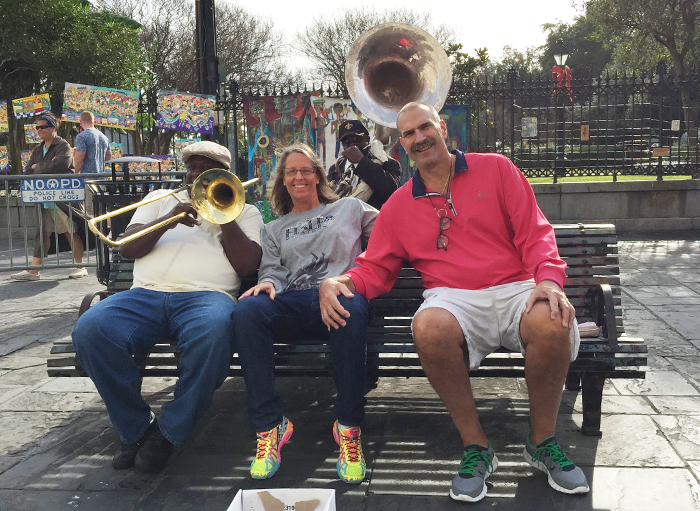 Jeff and Mary Cohen, with a Dixieland combo, during vacation in New Orleans.

Cohen married a fellow basketball player (Mary, a schoolteacher, had played on the McDonald’s All-American women’s team). Their first daughter, Samantha, was one year old when Cohen discovered that his colon cancer had returned.

He found another pioneering doctor and readied for another experimental surgery. Hoping to accelerate the healing process, Cohen eschewed post-op pain medication, and after being away from work for three weeks, he was back in the game. “It’s almost more of a mental competition than a physical competition,” Cohen says. “You basically just tell yourself what you need to do to lick this thing, and then you go out and do it. You might feel like death most of the time, but you’ll have an hour where you feel pretty good, and you build on that.”

‘I was yellow as a banana’

Eleven years later, Cohen was diagnosed a third time—this time, liver cancer. He traveled to Minnesota’s Mayo Clinic for intensive chemotherapy and radiation, which he received twice a day, every day, for a month. Although he lost 90 pounds in the process, he continued to work remotely, via dial-up connection, while Mary held down the fort with two young daughters at home (Hannah joined the family in 1993). His brothers, David and Joseph, traveled to the clinic to offer support.

After a month of this regimen, Cohen flew back home and was placed on a liver-transplant list. He continued to work.

Four months before his transplant surgery, he played a round of golf with a client who was a professional golfer and with former baseball superstar Alex Rodriguez. “I was as yellow as a banana, but I made a birdie on the 17th hole,” he remembers. 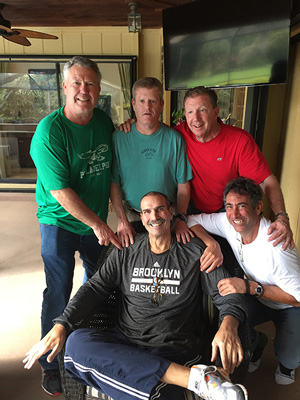 The liver transplant went well, and Cohen was fine for a few years. Then he developed esophageal cancer. Surgery wasn’t an option, so he underwent intensive chemo and radiation and lost 60 pounds. “They put me into a coma for three days,” he says. “When I woke up, I was feeling better and the cancer was gone.”

By then, word had gotten around about Cohen’s extraordinary mettle. His bosses at Wachovia asked if he’d consider writing a book that might inspire fellow employees, and he agreed. Collaborating with a ghostwriter, he published From the Edge of the Abyss: What I Learned While Whipping Cancer (High 5 Communications, 2016), available in the College Bookstore.

In the book, and in a recent conversation, Cohen stresses the need to seek out the best care (“you don't deal with someone who just read about your issue in medical school”) while not losing sight of the bigger picture (“family comes first, but work is a really close second”). He also explains how his time as a competitive basketball player, combined with his father’s results-oriented advice, helped cultivate a survivor’s instinct. And he acknowledges the value of a strong family support system.

Cohen also points to a close-knit group of friends in his extended support system, including his Phi Kap brothers and teammates, with whom he’s gotten together several times a year for the past 40 years. Five and 10 years after his liver transplant, Cohen threw anniversary parties in Florida, where he lives, and his teammates and fraternity brothers attended.

The challenges continue to roll in: After he finished the book, Cohen’s colon cancer returned, and he again underwent surgery. He also had a minor heart procedure two years ago and developed a brain infection in the hospital. Doctors placed him in a medically induced coma for six days—he still recalls vivid dreams from that time—and administered antibiotics. He’s now healthy again.

Cohen still plays golf, uses his rowing machine daily and works full time, arriving at the office at 6:45 a.m. He has no plans to retire.

“I’m not Superman. I just get up every morning, and I keep moving,” he says. “I think too many people go through the motions; they just get through every day. But life is meant to be lived. You can’t sit on the sidelines.”