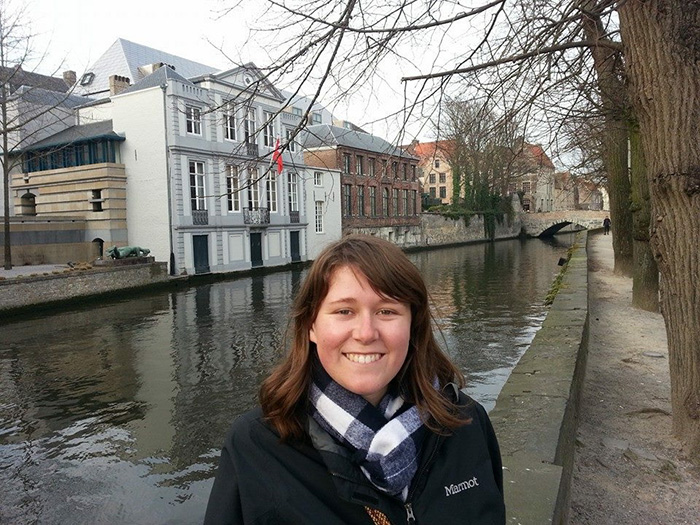 English major Courtney Helt ’16 is a record-setting tutor at Dickinson's Norman M. Eberly Multilingual Writing Center, having helped guide more fellow students through the writing process than any other tutor in recent memory. She's also at the cusp of a promising law career and will attend the University of Pennsylvania School of Law in the fall. Here, Courtney discusses the class and internship that inspired her to take that career path. She also recalls her study abroad year at the University of Oxford, where she gained a new understanding of “Englishness” in classic literature and discovered the joys of literary Southern cooking.

My senior seminar on traditional kitchen politics and Southern power structures, [led by] my thesis advisor, Professor [of English and Martha Porter Sellers Chair of Rhetoric and the English Language] Carol Ann Johnston.

I spent my junior year studying at Oxford, and it was one of the best social and academic experiences I’ve had in college. The one-on-one tutorial system provided me with the opportunity to look really closely at authors such as Dickens, Woolf and Elliot and to question their use of “Englishness” as a method of inclusion. Oxford was also incredibly beautiful and, although I did spend a lot of time in the Bodleian Library, I also had a lot of fun exploring the different colleges and punting on the Thames. I wasn’t very good at steering, but at least I never took a swim!

I will attend the University of Pennsylvania School of Law next year, and I would eventually like to have a career in child advocacy law. But I also hope to find the time to return to the United Kingdom to see friends and to try out some of the amazing recipes I have been collecting while writing my thesis on Southern food and literature.

I have a pretty good sense of direction. When I was studying abroad I spent a few nights in Amsterdam with some friends. The first night we were there, we were so tired, and we got turned around in the dark streets. Somehow I managed to find our way home, despite having no clue where we were on a map! I also have a deep love of cross-stitching, which my friends love to make fun of me for, though I know they are secretly jealous of my skills.

... a veterinarian, because I really wanted a puppy. As I got older I realized that I am not a fan of blood. Or birds.

I love working in the Writing Center, and I’m thankful that I have a job where I feel like I am really helping people. When I am in a session and a student finally understands what they want to write about or what their next step is, I couldn’t be prouder of them.

Two summers ago I interned with the York County Self-Help Center, a progressive organization that gives underserved people access to legal services, such as child custody, divorce and eviction, without cost-prohibitive fees. I was looking for an internship close to home where I could learn more about the law while actually helping people, and the Self Help Center was a great fit. While there I helped to connect people who couldn’t afford lawyers with local legal services. I also witnessed firsthand the structural disadvantages our clients had long faced. Seemingly small obstacles, such as affording parking, missing work and finding childcare, made even arriving at the center extremely difficult for our clients. Everyday aspects of my life, such as my ability to use the parking garage and afford professional clothes, became things to think about for others while helping them to succeed. I began to recognize the concrete ways in which our system leaves behind those who most need its assistance.

I am currently writing my thesis on the novelist and short story writer Eudora Welty. I am looking at her use of food in two of her novels as a means of exploring the politics of Southern kitchens and problematizing dominant knowledge systems. I have learned the importance of intellectual curiosity and that nothing is ever set in stone. If I hadn’t pursued what interested me, I wouldn’t be reading some fascinating old cookbooks and learning all about food studies—a discipline I knew nothing about.

Why I chose this work:

I was originally planning to write my thesis on Dickens, but during my Welty-focused senior seminar I presented a contextual presentation on Southern food, and I was hooked. I told myself that I would keep researching and thinking about Welty’s use of food until I got bored with it, but I never did. Now I am so fascinated by this amazing woman that I am always grateful that I changed my thesis topic.

I think over my four years at Dickinson I have learned a lot about cultivating work-life balance. My academics are very important to me, but I have noticed that my work suffers when I don’t give myself time to decompress. Sometimes I have the best ideas when I am taking a walk or having a leisurely brunch with friends. The more I sit in front of the computer and force ideas, the less I like the result. My favorite way to end the day is sitting on my couch, cross-stitching and watching The West Wing.