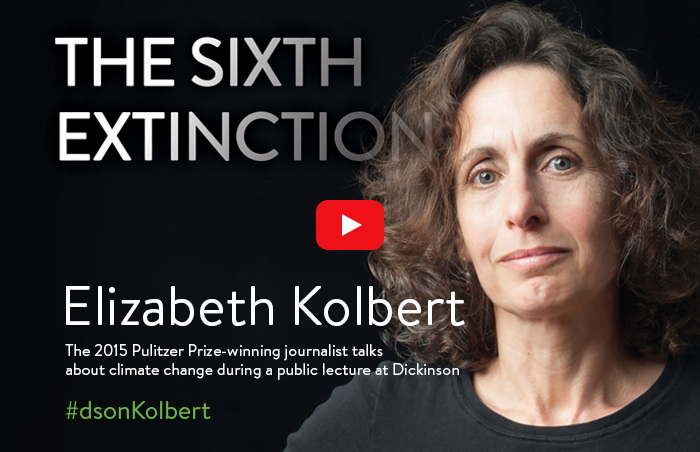 This year, Dickinson awards the fifth annual Sam Rose ’58 and Julie Walters Prize at Dickinson College for Global Environmental Activism to Pulitzer Prize-winning author Elizabeth Kolbert. The $100,000 prize, given to an individual or group dedicated to preserving the planet and its resources, incorporates a short-term residency for student and community interaction during the upcoming academic year.

Kolbert’s most recent book, The Sixth Extinction, received the Pulitzer for general nonfiction in 2015. She is also the author of Field Notes From a Catastrophe: Man, Nature, and Climate Change and edited The Best American Science and Nature Writing 2009.

A staff writer at The New Yorker since 1999, Kolbert writes extensively on climate change. Her three-part series on global warming, The Climate of Man, from which Field Notes was adapted, won the American Association for the Advancement of Science’s magazine writing award and a National Academies Keck Futures Initiative Communications Award. She is a two-time National Magazine Award winner and has received a Heinz Award and Guggenheim Fellowship. Additionally, Kolbert is a visiting fellow at the Center for Environmental Studies at Williams College. She will be in residence at Dickinson September 18-21, 2016.