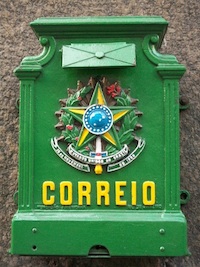 Live Show:
Dendê & Banda
Dendê is a percussionist, singer, composer, bandleader, teacher, and multi-instrumentalist. He’s been a professional musician since the age of 14, when he appeared in the frontline of Timbalada, Carlinhos Brown’s superstar percussion ensemble. Since 2001, he’s been developing his solo career, splitting his time between the US and Bahia in Brazil. Now on their second album, Dendê & Band have cultivated a unique sound where Afro-Brazilian traditions like samba de roda and candomble have been seamlessly melded with world rhythms like rumba, afrobeat and mbalax.
Location: Allison Community Center
Time: 7:30pm
Open to everyone! 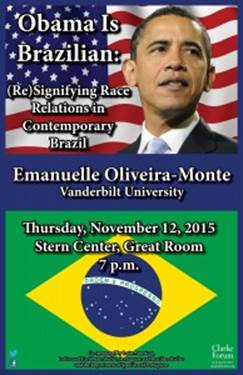 Barack Obama’s election to the American presidency in 2009 sparked a renewed interest in the theme of race in the Americas, and worldwide. The sight of an African American as President of the United States led analysts to declare that North America was living in a post-racial era. But Obama’s election also had a tremendous impact on the imaginary of the African Diaspora.  This lecture will examine his characterizations in the Brazilian media, especially in examples of political humor, such as cartoons and memes.

This program is sponsored by the Clarke Forum for Contemporary Issues and co-sponsored by Latin American, Latino and Caribbean studies, Portuguese and Brazilian studies and the department of Spanish and Portuguese.

Video of the Lecture

Do Brazilian Quotas and Affirmative Action Challenge us to Re-Think the History of Race Relations?

Founder and President, The Mega-Cities Project: Innovations for Urban Life

Perlman, author of the recent book FAVELA, will share her experience, findings, and photographs from field research in Brazil, starting as a student and continuing until the present.

The event is sponsored in partnership with The Clarke Forum for Contemporary Issues and the Student Senate Public Affairs Committee.  The event is also co-sponsored by the Bruce R. Andrews Fund, Portuguese and Brazilian Studies, Center for Sustainability Education and the Departments of Sociology, Policy Studies and the Community Studies Center. It is also part of the Clarke Forum's Leadership in an Age of Uncertainty Series.

Join us for a Brazilian Dinner and BBQ (churrasco) on Thursday, May 2nd from 5pm until 8pm, at the Althouse Trellis (behind the Quarry). We will have a variety of grilled meats (beef and chicken), side dishes, and desserts. We will also have pão de queijo and guaraná!

Organized by the Gastronomy Club and the Portuguese Club.

Organized by the Portuguese Club.