Pavel Lion, a.k.a. Psoy Korolenko (Russia), born in 1967, is a poet-singer/songwriter, scholar, journalist and musician from Moscow, Russia. He has performed on stage since 1997. Known as a 'wandering scholar' or 'singing professor', Psoy created his unique multilingual cabaret, combining traditions of Russian and European (especially French) popular and urban folk song, Yiddish folk and theater song, with elements of rap, sound poetry and other kinds of free-style poetry. Psoy has released a book of lyrics and essays Shlyager Veka (The Hit of the Century) and nine CDs, some of them in collaboration with Russian and foreign musicians, such as Daniel Kahn (US/Germany) and Jim Avignon a.k.a. 'Neoangin' (Germany). His film-screening performance Bed and Sofa (real-time rap commentary to the Soviet classic avant-guard silent movie by Abram Room, 1929) was presented in many universities in the US, and translated into English by Stuart Goldberg (Atlanta, Georgia Tech U).

“My favorite performance by Pavel Korolenko was his song about pizza. Pizza is one of my favorite foods and when I am traveling in a different country I always want to try their pizza to be able to compare and contrast! I like contemporary Russian poetry because I feel that I can relate to the current, popular themes of today.” --Nealy Harnsberger '13

“It was very powerful listening to Pavel Korolenko perform his poems. Each had its own tone and volume and inflection. Although I didn’t understand all the Russian, I could tell a lot about the meaning just from his tone. I’m really curious to learn more about what inspired some of these poems.” --Dan Appello '15 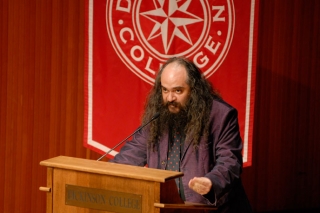