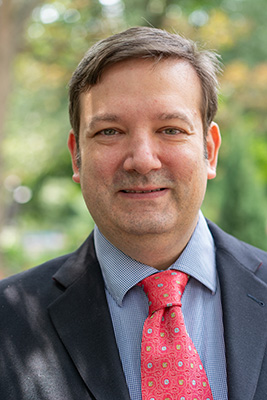 His research interests include German film, the literature and culture of the German-speaking Alps, and the influence of the Middle East in German culture. He has published on such diverse topics as the German mountain film, the poetry of Goethe, and Muslim minorities in Germany today. In addition to courses at all levels of German language and culture, he has taught recent courses such as The Mountain in the German Cultural Imagination, Minority Cultures in the German Context and Modern German Film.

GRMN 202 Int Grmn II: Mediated Grmn Clt
What was occupied Vienna like in post-WWII Central Europe? How does a film convey fear? Is German academic writing different from how I write papers at Dickinson? Posing these or similar questions, this course builds students’ basic intermediate level of cultural and linguistic skill and explores the challenges of understanding and communicating with various media in colloquial, academic, and professional contexts. As it does so, students will acquire a better understanding of contemporary and historical issues, anxieties, and desires in the German-speaking world. There will be a special focus on writing in different modes, as this is a writing in the discipline (WiD) course. Prerequisite: 201, or permission of the instructor.

GRMN 251 German Lit & Culture of WWI
Although eclipsed today by the horrors of World War II, the Great War or the War to End All Wars, as it was known, was also a cataclysmic event for European culture. In this course, we will examine how German-speaking writers, artists, and musicians dealt with the reality and the representation of war and its aftermath. We will read novelists, such as Erich Maria Remarque and Ernst Jünger, and poets, such as August Stramm and Gerrit Engelke. We will also analyze artwork of the period by artists, such as Käthe Kollwitz and George Grosz, as well as music. Taught in German.