Friedrich Durrenmatt (1921-1990), a Swiss author and playwright said that "a story is not finished until it has taken its worst turn."  Indeed, the story of Claire Zachanassian's gilded grip on the small town of Gullen is story taken to its most dire consequence.  The suggestion that justice can be bought is a concern as old as the concept of justice itself.  Most communities think they are incapable of such a terrifying notion.  Durrenmatt's play, written originally for Post-World War II Switzerland, is still as eerily relevant as it was in the 1950's.  The Visit explores the dangerous power of credit as an invisible force with the ability to morph into a perverted greed.  This is at the heart of Gullen's tragic flaw.  The repercussions of credit can be felt throughout contemporary society and it is what makes The Visit as frighteningly relatable today as when Durrenmatt wrote it.  If Gullen can take its "worst turn," what road might our society mistakenly travel down? 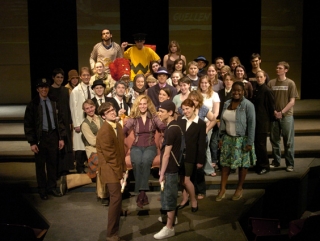