Vera Pavlova presents her new book on the poetry readings hosted by "Bookberry" bookstore in Moscow on September 15, 2005:

"In September our Dickinson-in-Moscow group attended a poetry reading of Vera Pavlova’s. Vera and her translator have been to Dickinson twice since I’ve been studying there and I had met them on both occasions. Both of them recognized us (our group) and I felt “almost famous” in that respect. Her new book sounds really interesting and hopefully I’ll understand more with the words right in front of me," Jennifer Mihok'07.

During Lev Rubinstein’s performance in Moscow club "Masterskaya" on November 16, 2009:

"Immanuel Kant believed that people see the world through the prism of space and time. I have to admit that viewing the world from the remote Moscow where I was studying for one semester, had been quite an enriching experience. However, when I learnt that the great Russian poet Lev Rubinstein was visiting Dickinson for the Semana Poetica while I was across the Atlantic, I had a strong reason to believe in a cosmic conspiracy against me. I can’t describe my feelings when our coordinator in Moscow Irina Filippova gave us tickets to his poetry reciting.
Visiting theaters, museums and Russian avant-garde exhibitions in Moscow and St. Petersburg has been a life marking experience, but Lev Rubinstein’s words accompanied by minimalist music created an exquisite atmosphere of self awareness. I hastily glanced at the faces of the rest of the “Dickinson crew”; we were all captivated. At least that’s what I saw. After the reciting was over, we offered him flowers along with warm greetings from Prof. Duzs. He smiled and we grasped the moment in a group picture," Nina Ioannidou'11

Alexei Tsvetkov’s poetry reading at the Russian State University for the Humanities on December 16, 2009: 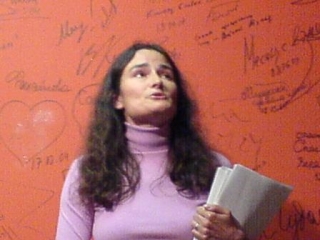 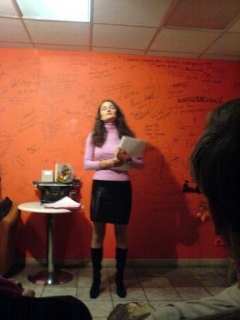 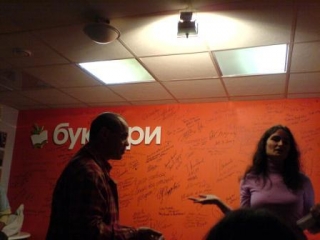 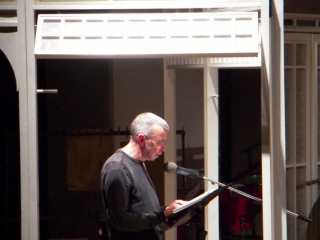 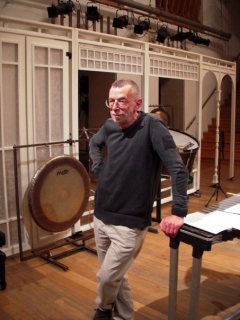 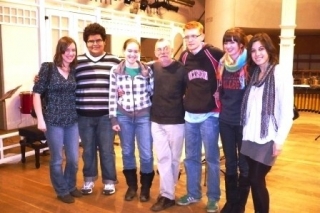 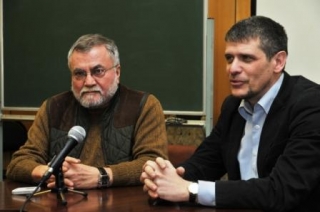 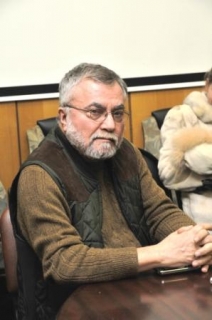 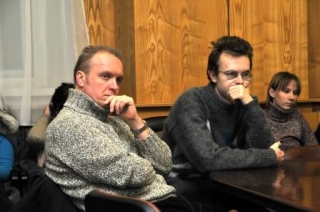