Established in 1994, the Social Change Model (SCM) of Leadership Development approaches leadership as a purposeful, collaborative, values-based process that results in positive social change.  The Model was built upon the following assumptions:

The SCM views leadership as a purposeful, collaborative, values-driven process, instead of a title or position. Leaders commit to improving the groups or communities of which they are part. In this approach to leadership, a "leader" is anyone who wants to work with others to make a difference. This collaborative process means that groups must have trust and requires that group members act in ways that are consistent with their own beliefs and values as well as the group’s goals. The team that developed the model concluded that eight values are necessary in order to have trust, common goals and true collaboration.

Awareness of the beliefs, values, attitudes and emotions that motivate one to take action. This is the key to being able to develop consciousness of others.

Thinking, feeling, and behaving with consistency, genuineness, authenticity, and honesty towards others; actions are consistent with most deeply-held beliefs and convictions; interdependent with Consciousness of Self.

The psychic energy that motivates the individual to serve and drives the collective effort; implies passion, intensity, and duration, and is directed toward both the group activity as well as its intended outcomes; requires knowledge of self.

To work with others in a common effort; constitutes the cornerstone value of the group leadership effort because it empowers self and others through trust; leadership as a group process; encourages group to transcend individual goals, interests and behaviors; vital that group members explore differences in individual values, ideas, affiliations, visions and identities.

To work with shared aims and values; facilitates the group’s ability to engage in collective analysis of issues at hand and the task to be undertaken; best achieved when all members of the group share in the vision and participate actively in articulating the purpose and goals of the activity.

Recognizes two fundamental realities of any creative group effort: that differences in viewpoint are inevitable, and that such differences must be aired openly, but with civility.  Civility implies respect for others, a willingness to hear each other’s views, and the exercise of restraint in criticizing the views and actions of others.  Requires trust amongst the group members; conflicts need to be resolved but also integrated into the common purpose.

The process whereby an individual and the collaborative group become responsibly connected to the community and the society through the leadership development activity.  To be a good citizen is to work for positive change on the behalf of others and the community. The practice of good citizenship should and needs to happen at every level of the model.

The ability to adapt to environments and situations that are constantly evolving, while maintaining the core functions of the group. Change is the value “hub” which gives meaning to the 7 C’s and is the goal of the creative process of leadership – to make a better world and a better society for self and others. 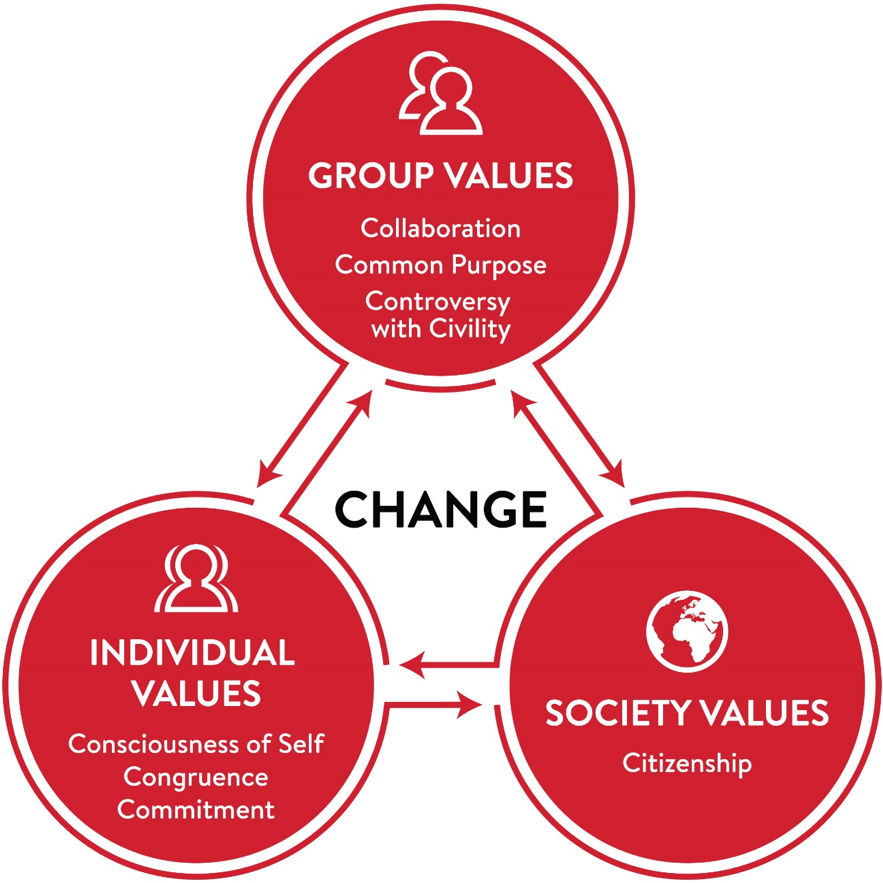 The Socially Responsible Leadership Scale (SRLS) is an instrument based on the Social Change Model of leadership development. It identifies and measures leadership capacities for research, assessment, and education.  SRLS online—a Web-based version of SRLS—helps individuals, groups, and large institutions recognize their strengths and use them for the greater good.  SRLS online is a partnership of the National Clearinghouse for Leadership Programs, Adele H. Stamp Student Union (University of Maryland), Survey Sciences Group and the Center for Student Studies.

The Multi-Institutional Study of Leadership (MSL) is an international research project that uses the Socially Responsible Leadership Scale and other measures to better understand college student leadership development and to assess the values of the Social Change Model for Leadership Development. Dr. John Dugan from Loyola University, Chicago serves as the Private Investigator and Dr. Susan Komives from the University of Maryland and Dr. Julie Owen from George Mason University serve as the Co-PIs for the research project. MSL is a partnership between the National Clearinghouse for Leadership Programs, Adele H. Stamp Student Union (University of Maryland), Survey Sciences Group and the Center for Student Studies.